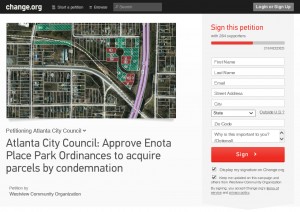 Thanks to the wide support and strong voices of Westview residents, neighboring communities, political figures and others we are pleased to announce that the Atlanta City Council passed ordinances to acquire the land to create Enota Park!

Atlanta City Council came together for a Special Called Meeting on Monday, August 19, 2013 to review ordinances to acquire parcels using eminent domain for the expansion of Enota Park. The Atlanta BeltLine has spent the last several years negotiating with land owners to acquire land surrounding the current Enota Playlot. While many parcels had been bought through normal means there were some parcels that proved to be challenging to acquire. All those remaining parcels are made up of vacant, overgrown land without any structural improvements. The unanimous votes by City Council will allow progress to be made on this vital park development.

Thank you to all the residents who signed the online petition, raised awareness through door-to-door canvassing, and appeared at the meeting to let their voices be heard.