“The Atlanta BeltLine is a $2.8 billion redevelopment project that will shape the way Atlanta grows over the next 25 years and beyond. The project proposes a network of public parks, multi-use trails and transit along a historic railroad corridor circling downtown and connecting many neighborhoods directly to each other by streetcar or light rail.” – BeltLine.org

To read more about the BeltLine go to www.beltline.org. 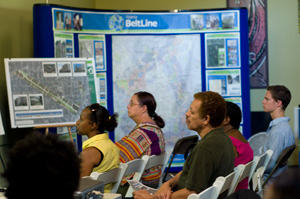 Westview is located in the BeltLine Southwest Study Area (Sub Area 1: Abernathy-Cascade). The master plan was developed through a series of hands-on workshops that involved neighbors and community leaders.

Full planning documentation can be viewed on the BeltLine website.

The final master plan was presented on Thursday, August 26th, 2011. 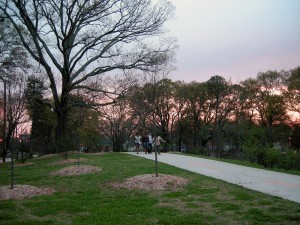 The existing BeltLine Trail in Westview is runs through the eastern edge of the neighborhood along Muse Street and Langhorn Street. It connects Westview with the West End and Mosley Park neighborhoods.

Ground breaking for the trail took place on December 12, 2009 as part of the “Go West” Celebration with Mayor-elect Kasim Reed and other community leaders. The ribbon-cutting ceremony followed on June 26th, 2010 as part of the Westview Centennial Celebration.

The “Model Mile” of the BeltLine development is managed by Trees Atlanta and the PATH Foundation and features meandering walking paths and an arboretum with hickory, oak, sourwood, beech, maple, and ash trees.

The Atlanta BeltLine Westside Trail began construction in the fall of 2014. Construction will take two to three years. The trail will be three miles long when complete and run from Washington Park to Adair Park, passing through Westview. The total cost of the project will be $43 million.

View the plans for the trail at 60% complete: BeltLine Westside Trail Plans. 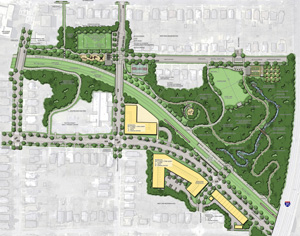 When complete, Enota Park will act as the gateway to the Westview neighborhood. The proposed park will be built between the BeltLine corridor along Langhorn Street and Enota Place. Enota Park will feature a number of amenities: a multi-purpose playing field, a full size basketball court, playgrounds, an event lawn, a restored creek bed, and a community garden.

The plans for Enota Park were developed during the BeltLine Sub Area 1: Abernathy-Cascade master planning process. Currently the BeltLine is acquiring the parcels needed to develop the park.

A BeltLine transit stop will be located in Westview near Enota Park. This stop is only a block and a half from the Westview commercial district along Ralph David Abernathy Blvd. A second transit stop is planned for the Kroger Citi Center at the intersection of Cascade Ave. and Ralph David Abernathy Blvd. The proposed light rail will connect the neighborhood with the rest of the city.

Art on the BeltLine 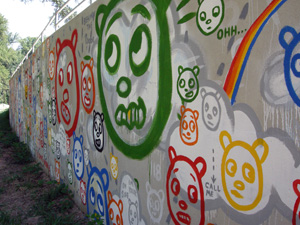 Art on the BeltLine is a newer addition to the BeltLine project. It showcases local artists through installations, murals, and live performances along the 22-mile loop. Residents and visitors are encouraged to find and explore these temporary art installations.

Art installations started to appear in Westview in 2010. In 2011 the project grew and showcased five new projects. Along Langhorn Street signs point toward the “BeltLine Bears”. Hidden behind a retaining wall the mural appears – hundreds of bears of various colors and facial expressions look towards the BeltLine train corridor. Down into the corridor behind the bears a plastic box called “Shrines for Ordinary Spaces” appears. The box contains little cereal box art pieces of a man forming a heart. Visitors are encouraged to take one and place it in a meaningful place. A little further along, just before the arches made by the Lucile Avenue overpass, clay doves spot the train corridor path. The clay doves are an addition to the existing mural by the same artist from the prior year, featuring mosaic waves and birds. Just after the overpass a group of neatly arranged wooden sticks appear out of the ground. And finally, just before the BeltLine hits Ralph David Abernathy Blvd, a bright mural of a family appears on a retaining wall along Muse Street.

To view photos of the artwork visit Westview’s Facebook page.

UPDATE 9/2/2013:
The Atlanta BeltLine has received a $18 million Tiger V grant towards the construct of the Westside Trail. Construction of the $43 million project is expected to begin in late 2014. Read the press release.